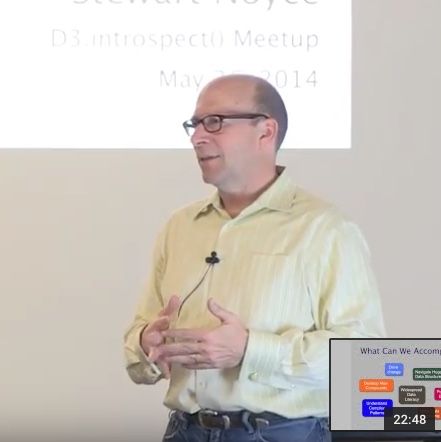 Do you need someone to tell your story with power? People trust me to understand a subject and speak its truth.  Though much of what I do is scripted, my real strength comes from speaking out of a place of knowledge.  That's when you get to go outside the script and let the truth out.

Recently, I was given the opportunity to show this ability at a Microsoft Innovator's Unconference in San Francisco on June 12, 2019.  I had five minutes or less to summarize the views our table held on disruptive innovation.  We noticed that successful leaders of new and disruptive products were more likely to be rules makers than rules followers or rules breakers.

Prior to that I had been active in the D3 visualization community, and three videos surfaced of short talks that I had made.  Very early on, I showed a JSON versioner running on a mobile phone.  After getting more involved in D3 programming, I put a visualization together that characterized the community visually and presented it at the d3.bayarea() Show and Tell on January 28, 2014.    Later, I gave a tutorial on how I put it together at d3.introspect().